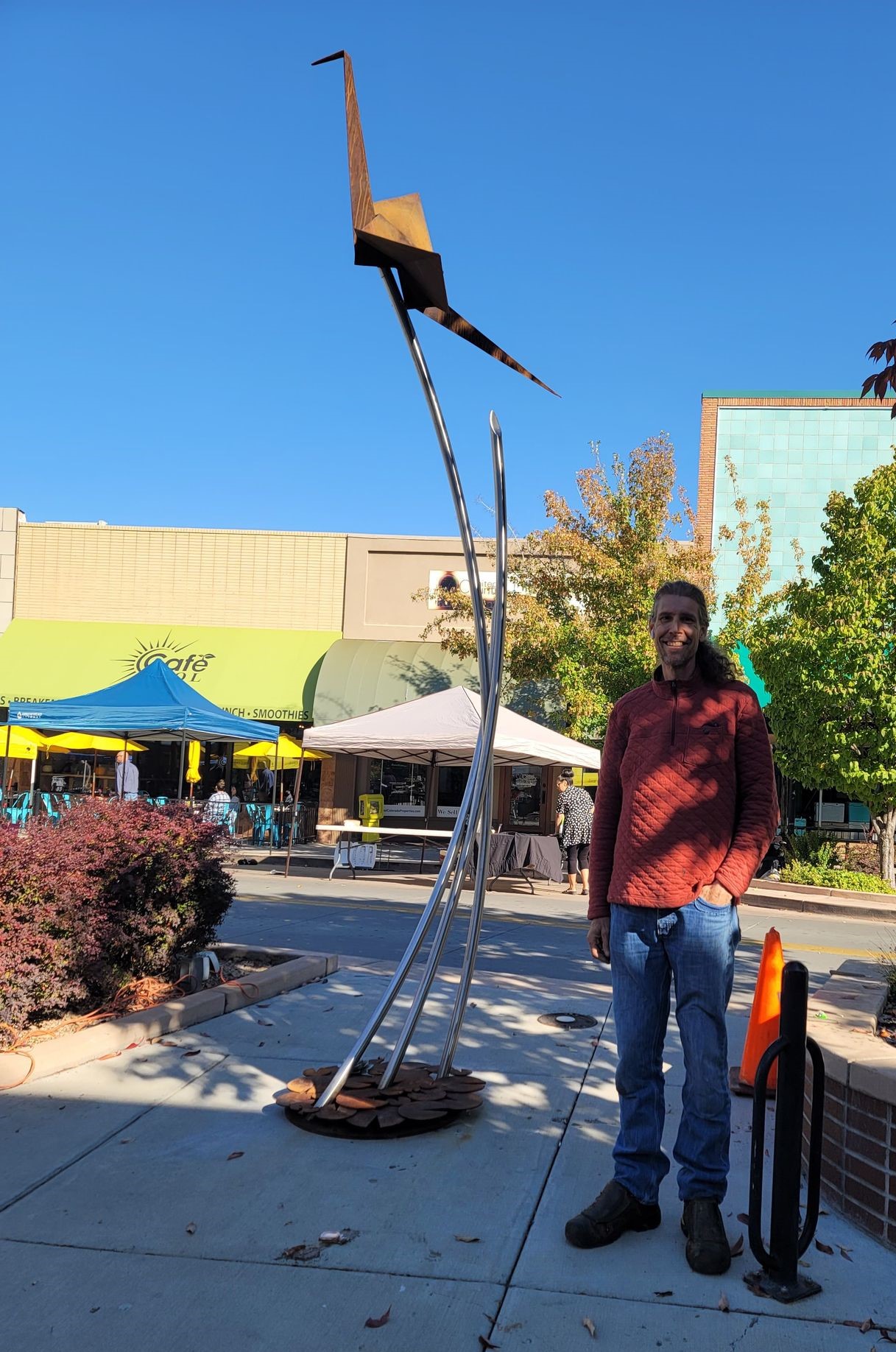 art on the corner

Grand Junction was one of the first cities in the nation to create an outdoor sculpture exhibition. This idea was brought to the members of City Council and downtown merchants by Dave Davis, an artist and Director of The Art Center of Western Colorado. Davis saw an opportunity to breathe new life into the downtown shopping park due to Exxon closing its operations on the Western Slope two years before, leaving Grand Junction a virtual ghost town. After gaining support, he assembled 10 area sculptors and on August 5, 1984, Grand Junction saw the first exhibit of 24 sculptures on Main Street. Since then, the community has supported Davis’ vision and continues to honor his legacy through the exhibition of new sculptures annually, the care of the permanent collection and keeping the history of the exhibit alive by offering community talks and walking tours.

As the program enters into its 38th year, we welcome 19 new sculptures featuring new artists and old friends. This year’s exhibit was curated by Colorado artist, Kyle Ocean. Kyle has been accepted into the exhibit twice before and we purchased his first work, “Skyline” in 2019. He is a professional sculptor who specializes in large scale metal works. Along with the pieces curated by Kyle, we invited Colorado Mesa University students to apply. This year we juried in two student pieces.

We hope you enjoy the quality and innovation of this exhibit.

These works along with the permanent collection can be viewed as you stroll along Main Street.

FOR MORE INFORMATION on how to purchase, please contact us. 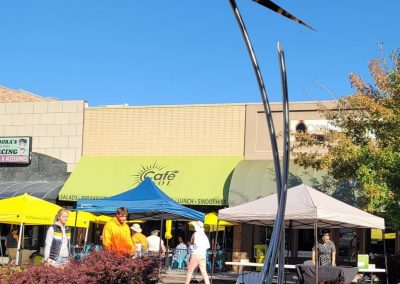 1st Place Best in Show, Dave Davis Award – August 6th, 1945. In a flash, 70,000 souls of Humanity were killed on this day in Hiroshima, Japan by the world’s first atomic bomb. Out of this terrible moment came lasting good. A two year old survivor named Sadako Sasaki was literally pulled from the ash, and 10 years later, facing her mortality from radiation induced leukemia, began folding origami cranes in hopes of improving her condition. She made 644 cranes before passing from her illness and subsequently transformed the origami crane to a symbol of peace that provided some balance to the dawn of the nuclear age. I have built “Risen of the Ash” to remember and honor Sadako’s life and her struggle with illness and mortality. This is the second time Sadako has risen from the ash, though this time it is her spirit and legacy gracefully rising towards freedom and coalescing to symbolize peace in the form of an Origami crane. The lotus at the base of the sculpture reminds us that beauty does flourish out of the dark and murky depths of life. We too may influence the world. Turn toward your fears, your darkness, your character defects. Find the humility to face them, accept them, surrender to them, talk to others about them and then seek the courage to change them. Out of the grit of our darkness may come a pearl, but only if we have the courage to bring these fears and defects to the light. In a flash, we too have the potential to change the world. Peace be with you Sadako and the victims of all violence and war wherever it’s found. 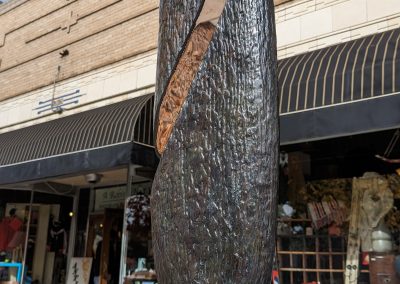 2nd Place Best in Show – The piece called “Rift” was inspired by plate tectonics and volcanic activity. The top half appears to be sliding up and over the bottom like a thrust fault. The texture of the bronze ellipse was inspired by a basalt bomb. 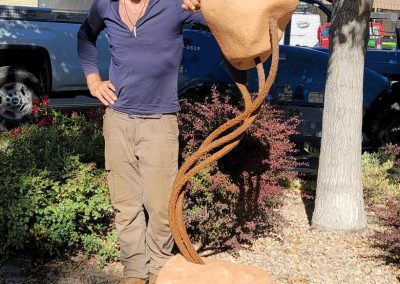 3rd Place Best in Show – Another musing in to the secret lives of rocks. Perhaps a daydream of working through the tendrils of gravity in hopes of a better view. 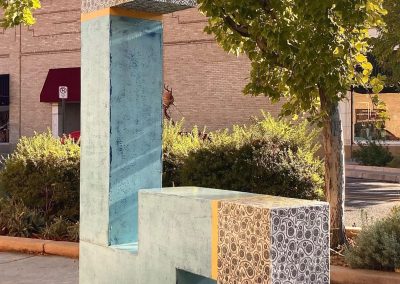 People’s Choice Award – DETH LIGHGHT V: American Vernacular is a work of biomorphitecture, which is a neologism naming the confluence of constructivist sculpture and living forms. Biomorphitecture engages architecture and structure through geometric, hard-edge design, but attends to living forms by a) focusing on objects of a human-scale; b) relying on handcrafted construction methods that do not engage digital or mass fabrication techniques; and c) encouraging direct interaction between the object and living organisms. In doing so, I want to harness the tensions between entities that we often consider contradictory. It is my hope that these sculptures will produce new and productive experiences, which will enable a better understanding of how we can thrive in our increasingly built-environments while also maintaining our humanity and attachment to ecological systems. This piece functions as a usable bench, thus interrogating the relationship between the object and human form. DETH LIGHGHT’S subtitle takes inspiration from Ralph Ellison’s essay “Going to the Territory,” in which he writes that the American Vernacular “springs from the synthesis of our diverse elements of cultural style [and] pluralistic character of our society.” He envisioned the vernacular as a historically expansive, aesthetically diffuse, and culturally open style not bound by medium, mode, or demographic. It, thus, articulates my idiosyncratic style as a product of disparate influences and opens the possibility for expressions that otherwise appear contradictory. 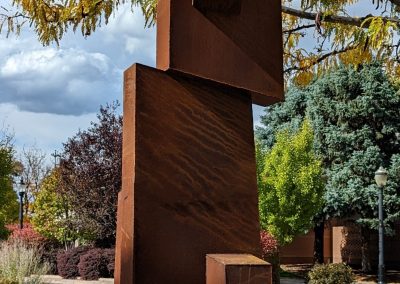 The tower is a grand monument made to take people away from every day scenery and enjoy something large and striking. 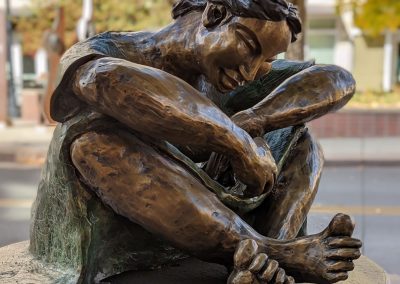 Gentle is a bronze sculpture of a woman taking a break from work. An earthy working woman is captured in a gentle moment of repose and reminiscing, Her toes are curling up with flashbacks of happy instances just passed and she has a blissful smile on her face. 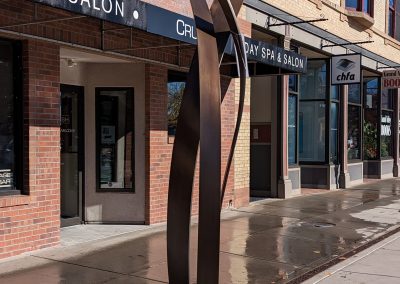 I explore movement and interaction with my sculpture. Beings twist and rise and set their bearings. They are eager for adventure. Everything in our existence has been created by movement of something and interaction with something else. With this piece beings and/or their paths have come together in an exuberant twirl. Perhaps they just got some time off. Or maybe they’re just happy to exist. Interaction alters paths. As you meet these previously unknown beings, I ask that you consider the possibility of sentient capabilities and value in those who may not be just like us. 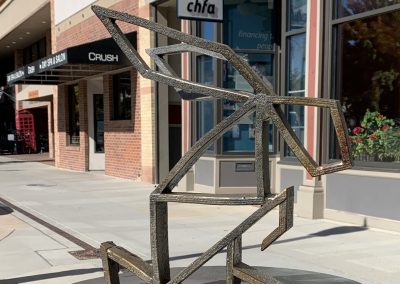 Almost Like Being Alive by Brian Marquez of Grand Junction CO $2,400 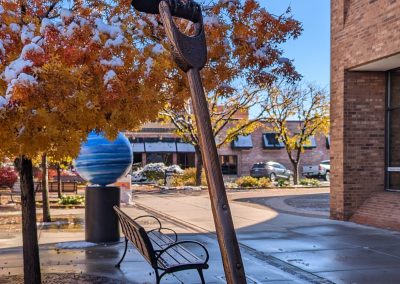 Guardian or Thief by Fred Lunger of Parker CO $7,000

As with many of my sculptures, the design starts with the base. In this case I found an old shovel at an antique store. The age and wear of this shovel led me to imagine it being left out in the garden or field after a hard day’s work. As I sat on my back deck thinking about how I might incorporate it into a sculpture, there were several Magpies and Crows flying around. Knowing that Crows have a tendency to raid a farmer’s garden, I pictured a crow sitting on the shovel deciding on what it wanted to steal, and at the same time defending or guarding the garden from other predators. My original thought was to sculpt and mount the bronze Crow to the shovel but decided the weight of the Crow on the wooden shovel might be too much for the shovel to handle. Instead, I decided to mold the shovel and have it also cast in bronze for the final sculpture. 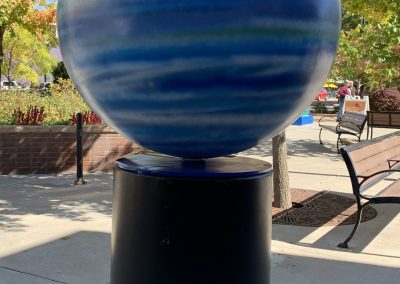 One Whirl by Joe Burleigh of Carbondale CO $12,000

“One Whirl”, as in “One Whirl is enough for all of us”. I like to think of it as a personal planet. 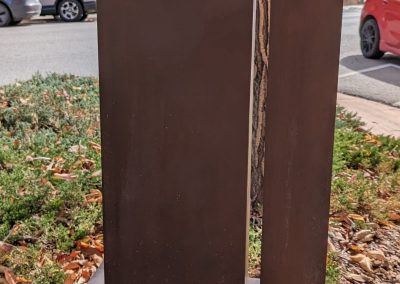 When confronted with uncertain circumstances, indecision overcomes the potato bug and he rolls up into a little ball, a defense mechanism, which we all have and use in one form or another. In time he will quietly come out of his ball and carefully find a new way along his path, as should we. 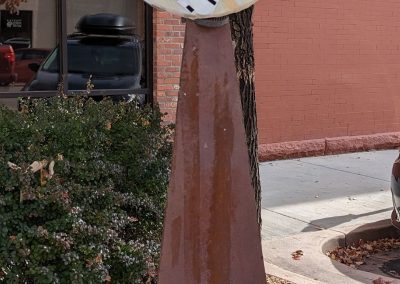 She Holds Up the Sky, Totem by Annette Coleman of Lakewood CO $9,000

She holds up the sky is reference to Mao, who used this saying in reference to women in one of his speeches, commending women for their role in building/running the society. Women amount to half the population and hence half the world. Iridescent glass casts delightful rays of color on surfaces nearby from the glass in this intimate mosaic sculpture. Think Pompeii abstracted, with the vivid colors of today, durable, timeless, and joyful. 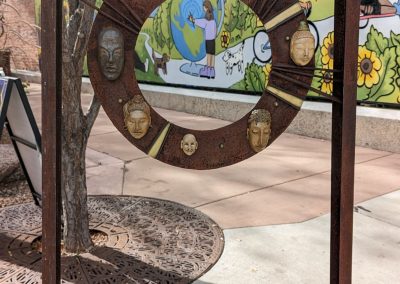 Symbolizes the connections of humanity and the cycle of life and time. Circles surround us; we have the moon, the sun, planets and stars. The circle with many faces communicates a concept of all-inclusive, cosmic harmony with no divisions and no beginning and no end. It also illuminates the cycle we all share, including our joys and struggles with ubiquitous events like birth, death and human relationships. 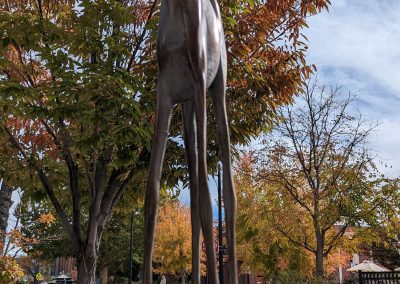 The horse embodies endurance and loyalty. Horses hold a position of vital importance in the West, not only because of their dutiful service to humans but also because of their “freeing” and “space changing” effect on our human psyche. I hope this sculpture captures that sense of wild nobility while creating energy between its inspiring vertical expression and a perceived sense of space. “Horse” comes from my personal perspective that was deeply influenced by growing up in the rural West, with its dramatic land, weather, and extant lifestyle. 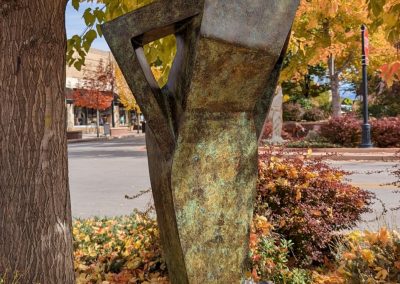 My art communicates a perception of humanity on an emotional level. It is here that my art-sculptures and painting find a voice and become an investigation into our society or history that express a commentary that I feel is relevant to our world today. 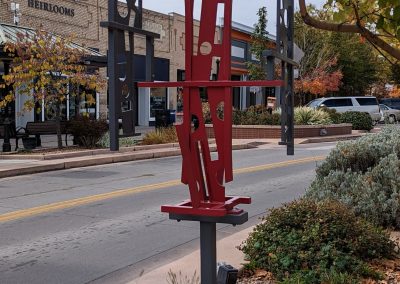 Many means of transportation have outriggers – sailboats, canoes, motorcycles…This sculpture has two outriggers. 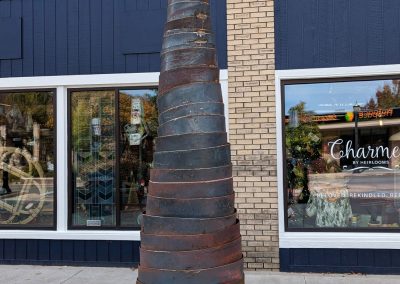 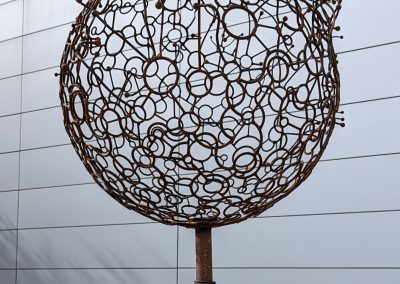 Unraveling is both strange and familiar, cellular and universal. A unique combination of shapes and textures inspired by crop circles and other alien patterns combine to form the most relatable and organic human form that exists, the sphere. Each observer sees something a little different: a planet, a viral cell, coalescence of sperm and egg, or something more. Finally, like many of Alex’s unique sculptures, Unraveling’ is hollow, inviting the backdrop as a component of the sculpture itself. 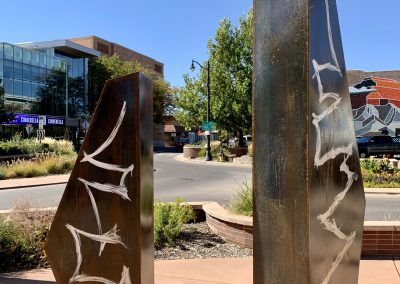 This work investigates the relationship between painting and sculpture. The two forms work together in contrast, while the surface detail represents a playful nod to a flowing river. The objective of this piece is to delve into the narrative of man’s manufactured cityscapes to the complexity of nature and how we find ways to bring nature into cities artificially. This piece explores the materials and processes we use in construction materials and breaks them down to represent the dichotomy of cities and nature coexisting and created by man in large city spaces. The scale of this piece is intended to draw in the viewer from afar to further investigate and explore the space. The orientation of this piece can change based on its location in space, however, the intention is to place the metal forms in such a way to create tension and use negative space to invite the viewer to explore the entire space and experience this piece from all sides and perspectives.

let us know how we can help below.